< Back to all blog posts

The use of Precious Metals in High End audio

Precious Metals – What they are

To many people, the term ‘precious metal’ may mean simply a metal that is expensive to obtain in comparison with the more common metals used in manufacturing such as steel, copper and aluminium.

In this report our definition is more specific. We define a ‘precious metal’ as one of the six known as the ‘Platinum Group’. These metals are essentially very rare and very expensive to obtain. Some are used extensively in the jewellery trade for outside plating of rings and other high value pieces on account of their excellent resistance to corrosion over long periods.

Why use precious metals in audio?

There can be only one justification for using precious metals in audio and that justification is the quality of sound and the realism of a performance of recorded music. Precious metals are very expensive and their use can only be justified when they give more enjoyment of a musical performance than can be achieved using lower cost materials.

Do all metals sound the same?

There have been many people in the past, including some experienced audio experts, who have claimed that cables are not important and that all cables sound the same. Experience has shown the opposite to be true. Hi-fi magazines now regularly review the different sound of different cables, and give awards to those they consider to be the best.

Testing the sound quality of metals

During the 1990s, cable designer Graham Nalty tested of many different metals for their sound quality. The tests were carried out by assembling a 1 metre stereo interconnect cable to connect between a CD player and an amplifier. The test cables were simply assembled from a 1 metre length of the metal under test. The test wire was used for live signal connection and the same standard wire (PTFE insulated silver plated copper) from the same reel was used for the return conductor. In order to test metals that could not be soldered, an RCA plug with a screw connection for the centre pin was used.

By comparing all metals on a like-for-like basis, it was possible to derive a rating for each metal on a rough qualitative scale.

Almost all cables tested were superior to copper, which nevertheless is the most common metal used in audio. A rough order of performance, starting with copper would be:

The choice of Rhodium at the top of the table is based on testing of rhodium plated wires as described later.

Materials such as Zinc and Aluminium gave a slightly better sound quality than their price might indicate, but these metals are not so easy to use in commercial production. Tin melts at a temperature lower than that of a soldering iron and zinc not many degrees above.

The sound quality of metals used for plating

Many metals are plated on the outside with another metal. The advantage of this is to be able to use the useful properties of the plating metal without paying the full cost of a wire of that metal. Silver-plating of copper wires is very common in a number in a number of different industries for many varied reasons. One of the benefits in audio is that the silver plating is that increases the clarity of music. Although the benefits are obvious on listening, some hi-f users and professionals prefer not to use silver plated cables.

As in many other areas of life, people develop allegiances based on their personal preferences and the majority of hi-fi users are happy to use plated wires and connectors in the hi-fi.

In another test, Graham Nalty has researched the sound quality of precious metals when plated on the same base wire. In this case molybdenum wire was used, as a rhodium-plated version of this wire was being used for the highest quality interconnects in the Black Rhodium range.

A very thorough test of whether silver wire delivered superior sound to copper wire has been reported in HIFI CRITIC1. The author Martin Colloms, a highly influential British audio reviewer and journalist, described how “carried out and elaborate test to check the veracity of claims that silver wire sounded different to copper.”  He reported that everything that could be changed from copper to silver, including individual components, was changed. He described the silver version as “an order of magnitude more transparent”. Our own simpler tests back that up every time, even when as little as a single audio interconnect is changed.

Characteristics of Precious Metals in the Platinum Group

List of Platinum Group metals in the Periodic Table showing their close neighbours.

The element of atomic number 43 is a hazardous material and will not be further considered.

Elements in the Platinum Group are highlighted in a light blue background.

The element of atomic number 43 is a hazardous material and will not be further considered.

Density of the elements.

When a metal is used to carry electrical currents, the most important characteristic is the resistivity. That is the measure of its resistance to the flow of electrical current. The energy used in overcoming electrical resistance is converted in heat, so that metals with a higher resistivity will consume more power. Unless the wire is being used for the purpose of heating, the lower the resistance of the wire the less power is lost through heat in the wire. In commercial terms, the less electrical power lost in heat during transmission, the more power that is available to be sold to consumers. 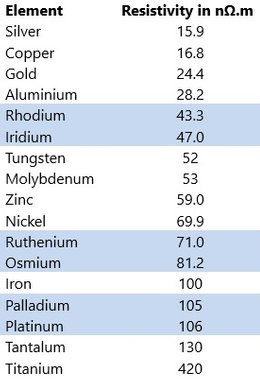 Silver and copper have the lowest resistivity. Copper wire costs much less than silver wire. This explains why almost all electrical power cables use copper.

Copper is the most popular choice of metal for the wire used in audio cables. Silver is used only in cables for high end audio systems where performance is more important than the cost of silver.

High resistance wire can be used for very low current cables such as most audio interconnects and Black Rhodium’s designer has successfully used Titanium in a stereo interconnect, the Vemilion’ which won a 5 STAR award from What Hi-Fi? in the 1990s.

Can the atomic number tell us anything about sound quality?

The first point of interest is that the three metals with the lowest resistivity. Silver, Copper and Gold all fall within the atomic number column of elements 29, 47, 79.

We have already seen reference to a report that silver sounds more transparent than copper.

A feature of the platinum group metals is that the test on the sound quality of plating materials is that Rhodium plating rated higher than Palladium and Ruthenium. This indicates a possibility that the Cobalt/Rhodium/Iridium column metals could offer superior sound quality to those on either side.

The column including Gold is further away from the Rhodium column and Gold had a lower subjective quality assessment than those nearer the column that included Rhodium.

It is very difficult to make predictions, but it does seem possible that if there are any metals that can improve on the sound quality of palladium and platinum, then these are most likely to be Rhodium or Iridium. And these metals are even more expensive to buy!

Are other design features of a cable as important as the metal wire?

If we accept that silver wire, on a like-for-like comparison, sounds better than copper wire, is this always going to be the case? Other design features such as the dielectric quality of the insulation, screening against RF interference, twisting of cables to reduce inductance, cross sectional area increase to reduce resistance and the geometry can all affect the sound quality. Processing of the cable after manufacture such as cryogenic treatment and cable burn-in all change the sound quality in a way that can be heard.

In a market survey conducted by Black Rhodium’s designer Graham Nalty, all the cable companies that used pure palladium or palladium alloy in their cables, priced these cables much higher than their best silver cables.

A good insight into the performance of palladium interconnects comes from a report to Black Rhodium from Michiel Bouvens of YN Audio, a former Dutch distributor for Black Rhodium. After taking the Black Rhodium Cantata DCT ULTRA cable to test with high end retailers in Holland he reports:

“. . .it is an amazing cable that fits world’s best audio gear. Compared to many other cables I have used it sounds more fluid and for some reason, not to describe and not to hear, feels more natural. It has the detail of Silver but sounds smoother, the soundstage is very touchable and the overall picture is very open, everything has its own place.”

With only about a dozen manufacturers of cables using Platinum Group metals in interconnects at present, the market will surely grow as more and more people seek out a better listening experience from their music systems, and Black Rhodium is one of the pioneers leading the way.

Further improvements to the sound quality of palladium cables

Extensive research and development work by Black Rhodium has shown that Deep Cryogenic Treatment (DCT) enhances the sound quality of any and every cable that we have tested with DCT. Bass become tighter and more natural, treble become smoother and less harsh and the musical soundstage become clearer. Our slogan for DCT ‘Adds, Depth, Clarity and Timing to music’ has proved over the years to be a very accurate description of the benefits of cryogenic treatment. 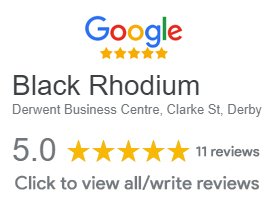